We are open- Online orders are still being processed & shipped daily.Staff are here 7 days a week from 9am-5pm PST to take your calls & orders. 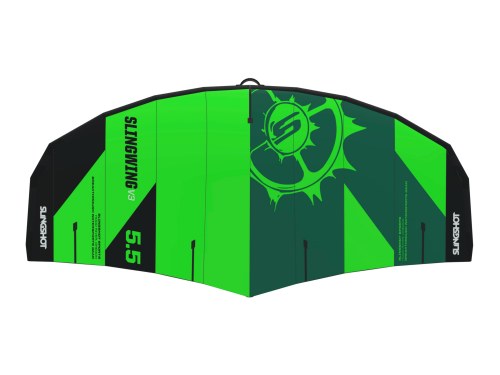 Slingshot designed the all-new SlingWing V3 to give you significantly more power per size. Using a smaller wing in the same wind provides the advantages of higher speed and increased control with less weight and drag.

When the sport you love is powered by the wind, choosing the best way to harness its energy is critical. We can all agree, flying, turning and gliding certainly sounds better than slogging and bogging. Gliding over the water on foil should feel calm and effortless and Slingshot strives to make that as attainable and easy as possible. Thanks to the reliable steady pull, forward drive, and effortless balance of the all new SlingWing V3, winging has never been more intuitive. Thanks to its rock-solid rigidity, the V3 has loads of power out of the pocket. This means less time slogging and bogging, and more time gliding, turning and floating. Having wing-powered fun shouldn't be a hassle. Let Slingshot's new SlingWing open up a world of new possibilities.

Wing design is moving at light speed and the Slingwing V3 continues to lead the way by delivering unparalleled power, performance and ease of use.

This product has not yet been reviewed.

Please login or register to write a review for this product.